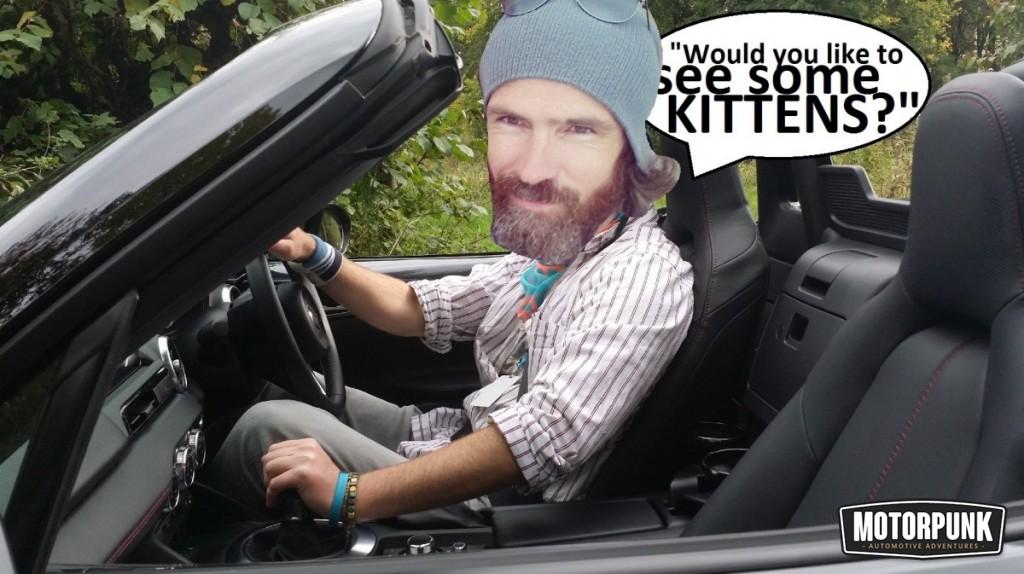 Proper motoring hacks receive test cars delivered to their front doors, down gravel driveways. I don’t. I have to go out and find my quarry. Mind you, delivering a new model to the 12th floor of a high rise would be tricky. Besides which, I’m not a proper motoring journo. Merely a funny looking bloke who knows some even funnier looking blokes who have a website about motoring. So the day arrived. An otherwise non-descript Wednesday in October. This was chosen as the day I was to be allowed out of my hamster cage to sample the life of a real-ish motoring hack. I was duly salivating.
Dribble or not, I was parachutted into a posh country hotel in the middle of the shire of Shrop where I was cordially met by some people in Mazda coats. A bit like lab coats, but darker and more edgy. I was just happy I’d actually arrived at the right place and on the right day, as the one and only time previously when I’d been tasked with reporting in the guise of a motoring semi-professional I rocked up at the NEC a full 48 hours AFTER the British Motor Show press day. However I did manage to get off with a girl from Worcester I’d been chatting up online for a fortnight leading up to it, in a Birmingham nightclub. Although the very next morning I awoke to discover my 1991 Golf GTi had been broken into and some low-life had half-inched by Liverpool FC shirt with Steve McManananananananaman’s name on the back. Which on account of it costing me £1 per letter was of considerably more financial value than my ageing VeeDub. 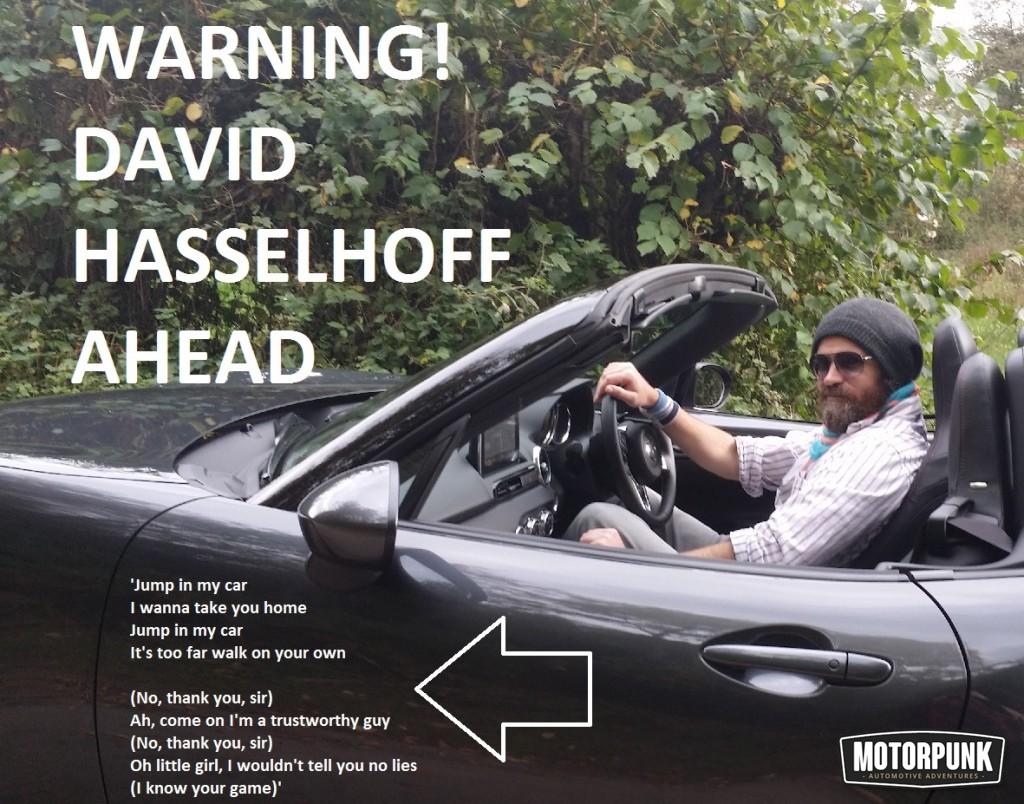 Anyway, after a spot of luncheon – which had been laid on by the Mazda folk – I stepped outside to choose my weapon. This was a very different kind of weapon to the one I remember wielding in Brum in 2002 to be honest, as for a start it was a car. A Mazda car. Having been confronted with a list of possible contenders I opted for an MX-5 2.0i 160ps Sport and a CX-5 2.0-litre 165ps 2wd SE-L Nav . Partly because I like the number 5 and partly because I go a bit funny in the head when spoilt for choice (there were 24 models from which to ip dip, ergo my head was spinning). Both had 2-litre engines, this much I recall, while one was A Feeling Under the Weather Darth Vader Grey in exterior hue and saturation whilst the other was more a kind of Shotgun Wedding Non-Virginal White. I imagined myself in the MX-5 first, which didn’t require a huge leap of faith as I sport ill-advised facial foliage and have been known to bore the hind legs off a sanctuary full of donkeys (or as it was in the event, a corner of a country pub dedicated to forum members (sic)) when chatting car chuff. 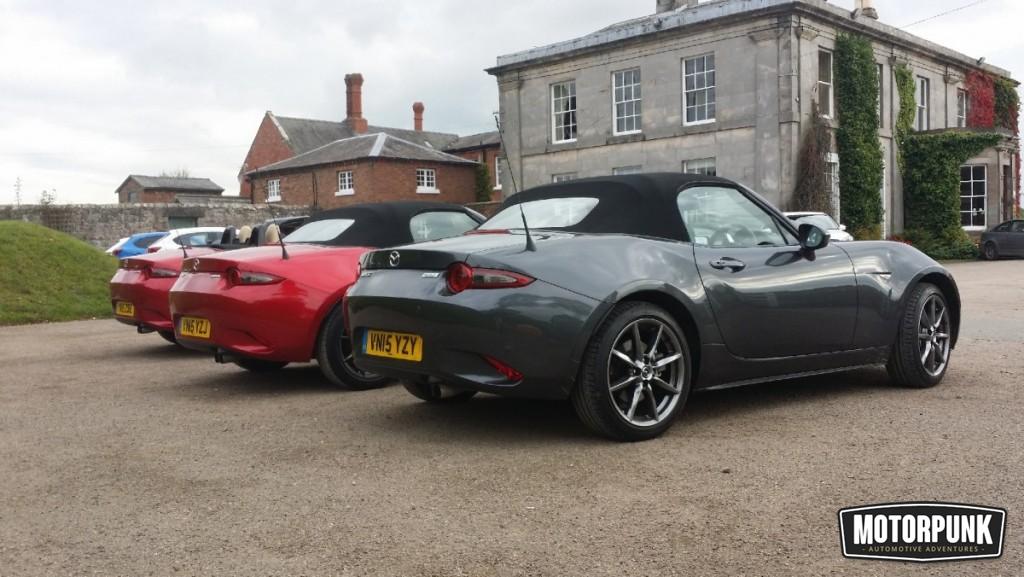 Thankfully the small grey sports car with a retractable hood was equipped with the obligatory Country Pub Warning Light, which pretty much illuminated itself from the moment I cleaned my shoes on its carpet. But before I could chat to myself (and myself only) relentlessly about the merits of the all-spanking new MX-5 in the corner of a local hostelry I first had to circumnavigate a ford which had suddenly appeared from Nowhere. An actual watery ford, as opposed to a crappy Fiesta Flight. Sadly the MX-5 was as adept in 3 centimetres of water as one of those shit pseudo-diver’s watches you get from Argos as a gift for a male family member you despise. Ergo I stalled it. 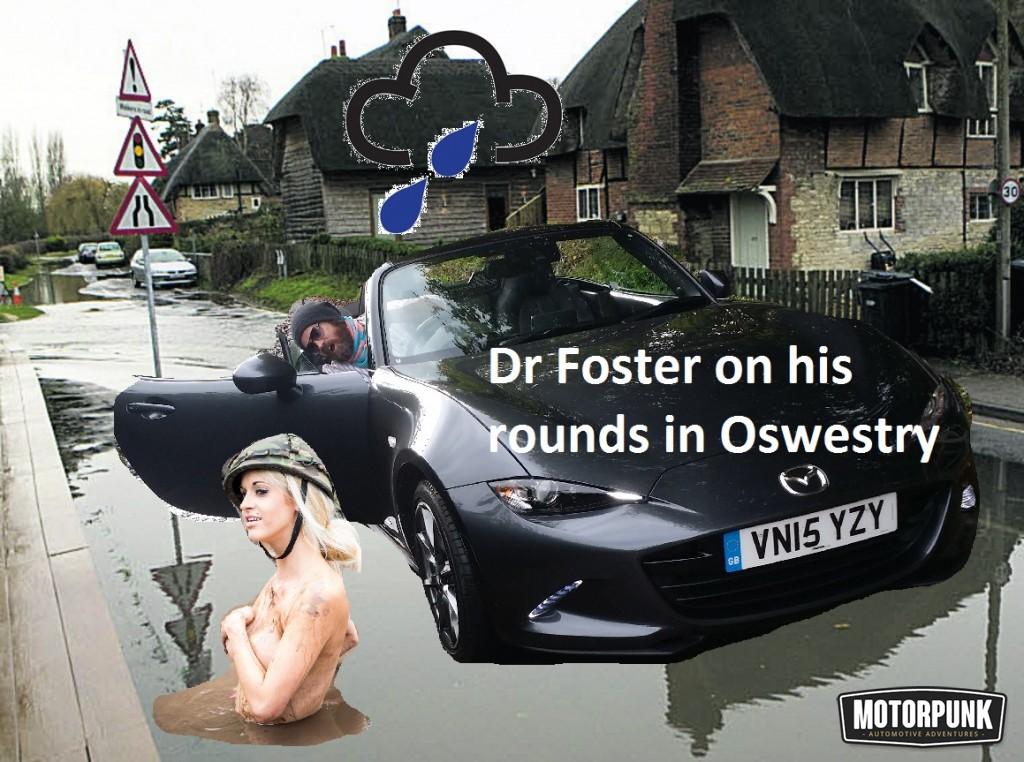 Once I cranked it back into action I headed up a local hill, which proved as challenging to the supple and lithe MX-5 as an eat-all-you-want-buffet would for a famished James Cordon. And once I marched to the top of the hill I marched back down again. A little ‘in joke’ there for those of you familiar with the border land between England and Wales being historically referred to as The Marches. To the rest of you, meaningless. Anyway, after skirting with lots of B-roads and Oswestry town centre (where I purchased a corduroy Dutch bargeman’s hat to wear for the remainder of my road test) the Country Pub Warning Light was doing its nut, so I was left with little choice other than to pullover. It was of course, a mottled shade of Ditchwater Blue and manufactured from fairweather Arranswool. Sadly the drinking den was closed (as by now it was the middle of yon aft’noon), so I instead pointed the MX-5 at another strip of Tarmacadam and blapped it everywhere. Only I didn’t, because once I got home and started penning this review I discovered the true meaning of the word ‘blap’. 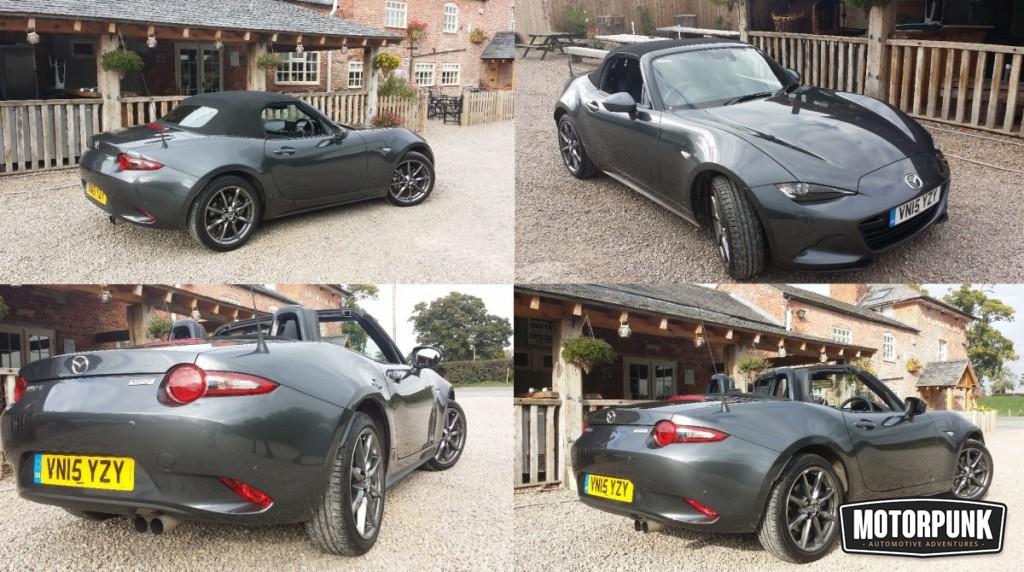 Sharp, agile, tight, the MX-5 was all of these things and more, like a witch’s hat. As fast and as jaunty as fast and jaunty can be, the perky little Mazda also secreted a lot of cup holders and cubby holes about its person; but alas no glovebox. The MX-5 also smelt much nicer than I had imagined it would too. Or maybe this was because it was a long time since I’d been in the confines of a new car. Important to report that there was hardly any road/bird/accompanying girlfriend sound with the roof down either, although conversely the air con was a tad fishwifey. The MX-5 also had cool alloys, yet this did little to compensate for the fact that I had to exhale breath and seep sweat in order to put the roof up once it started getting a little nippy out/in. I also dislocated my shoulder in the process of securing the manual canopy. Still revenge was mine when 20 minutes later I nearly killed it when a weird Metallica noise began emitting back in Oswestry. No idea what I did to instigate this, but I did it really fast into a slow right hander for dramatic effect. 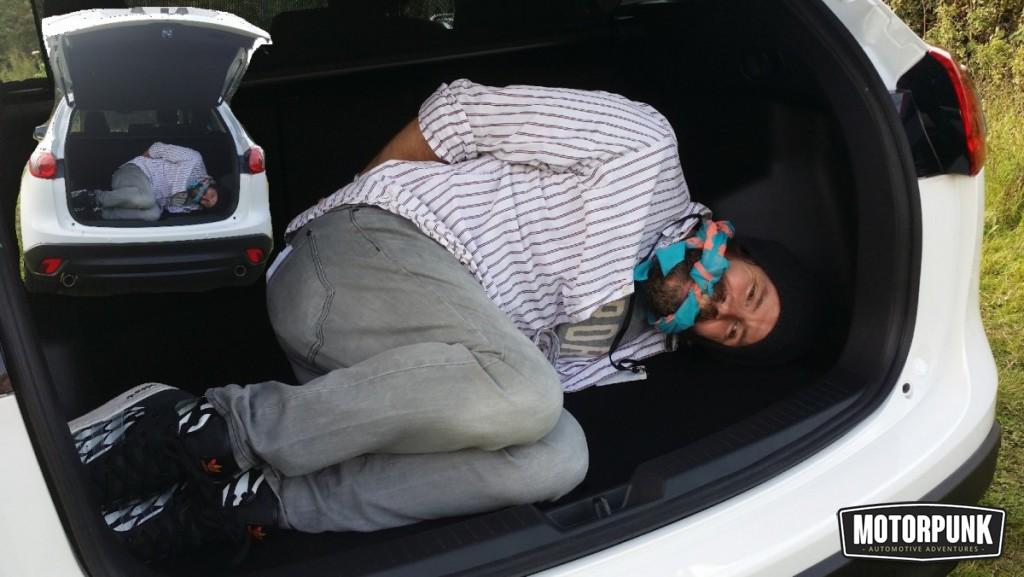 By now time was rolling on, so I ventured back to the country pile to swap Mazdas; stopping momentarily to alight the MX-5 and exchange it for a Sophie Dahl more fitting of a larger brood. Only I have IBS, so extracting myself from the bowels of the world’s lowest Mazda was an ungracious art form for the precise 20 minutes it took me to plop out onto the posh asphalt where I’d parked it and recoil in abject misery. This (when I looked up) was when I encountered the cathedral-esque CX-5 for the first time. Which the brochure informed me was a cross-over. Despite my Victorian father always telling me to avoid crossovers I really liked the cut of this Mazda’s twinset and pearly white paintjob and immediately emitted a deep sigh of middle-aged gentleman’s contentment when clambering aboard/scaling its driver’s seat. Once ensconced in its inner sanctum I quickly remembered that I’d confused the CX-5 with the CX-3, its smaller, sexier sibling which I’d been meaning to drive after seeing a picture of it on Google Images. And just before I typed the words ‘Green, Eva’ and ‘armpits’ into the very same search engine. But it was too late. The road beckoned and the Mazda PR staff were doing that thing with their frowny faces and wrist watches. Whilst still rocking their Mazda bomber jackets. 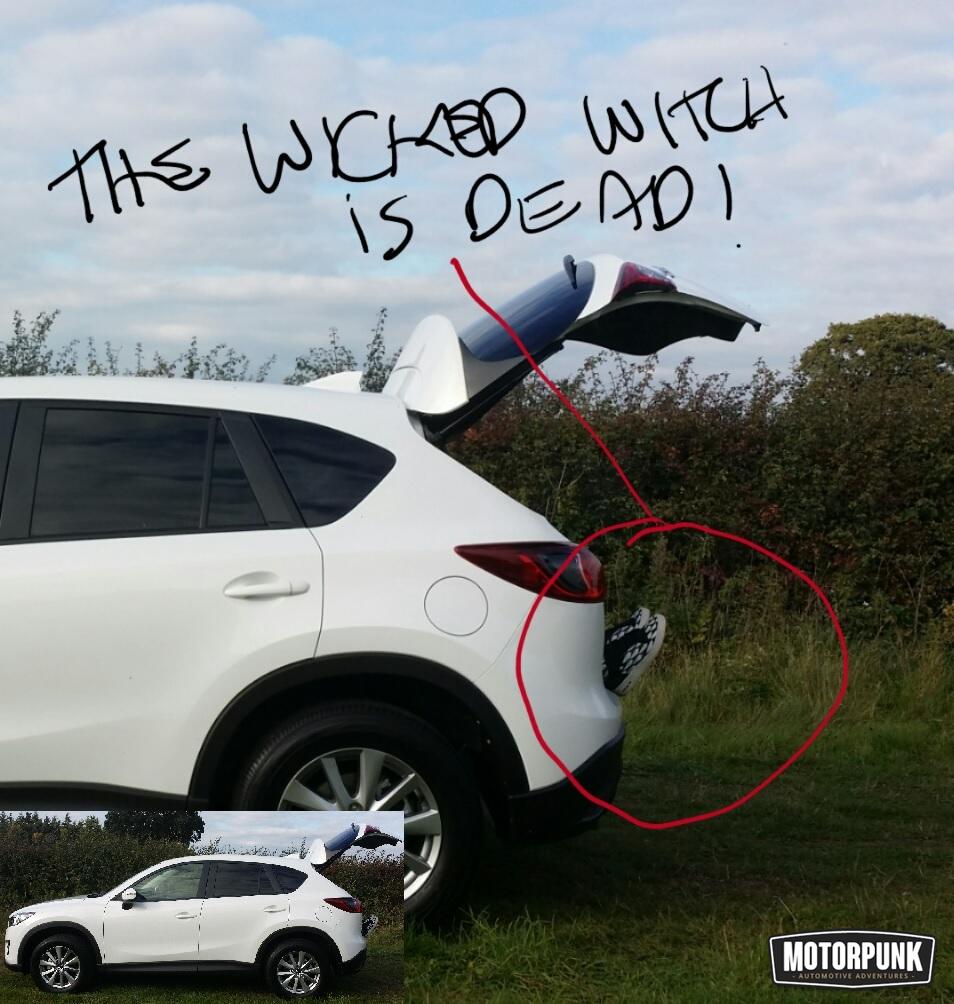 Off I toddled then, with my dander up, unto the inviting bosom of Shropshire. This time I took it upon myself to set the on-board sat-nav for the Knockin Shop. Although if you do ever find yourself the owner of a CX-5 (complete with a junior football team seat-belted within) I very much doubt you’d have the energy remaining to darken the door of such an establishment. Thankfully I was childless, and the Knockin Shop in question was a village newsagents where the only titillation came at the expense of the rural emporium’s slap n tickle moniker. After perusing the top shelf selection I jumped back on my CX-5 and continued my road test, still not knowing what the hell I was supposed to be doing; other than driving aimlessly around Shropshire in a rather capacious car. Wondering just how accommodating the CX-5 REALLY was/still is I decided to conduct an impromptu consumer test in a lay-by. Obviously I was quickly moved on by the police, but then I found a quiet lane where I parked up to try and establish just how many 6 feet Northerners with a rictus stare you could comfortably house in the biggest of big Mazdas. 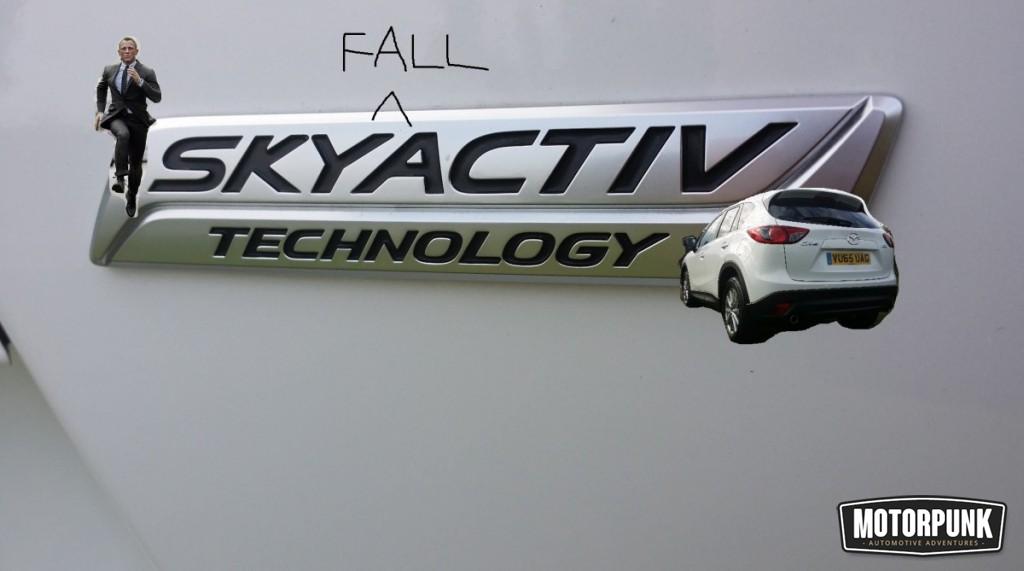 I discovered the mathematically correct answer was 54.2. Although if I made like a pancake with the rear seats folded flat my garish hi-tops became a fire hazard, physically overhanging the taligate. However, if I curled my gangly-self into a tight ball I could easily be trussed up like a Christmas turkey in the rear quadrant until a passing motorist heard my cries and released me. Which proves beyond reasonable doubt that irrespective of the rear legroom being compromised on the backseats, this was ably compensated for by way of the (dead) body space in the trunk. Generally – and with everything folded flat – the 54.2-seater CX-5 could behold many with its vast open spacey-ness and exaggerated stowage areas. I also found when taking it back out on the roads that it absorbs both manholes and sheep with a willing ease. 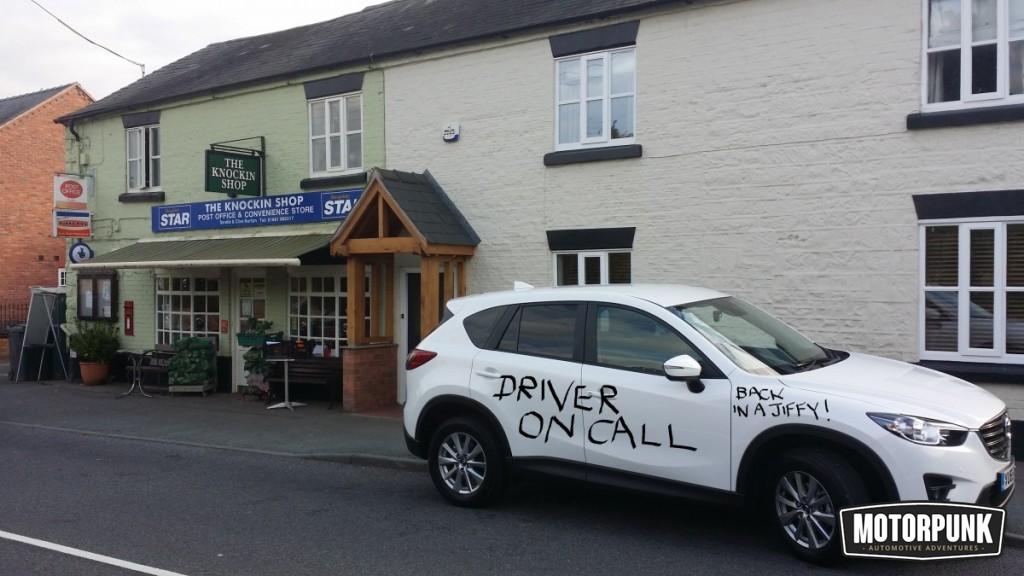 The in-built Mazda sat nav eventually led me to what appeared to be a Mormon church. A white clapboard affair which looked absolutely delightful in the watery, mid-afternoon October sun. Rather like the reverse of the sleeve of the 7” vinyl recording of Perfect Day’s 1988 chart smash, ‘Liberty Town’. And do you now what? I too was having a perfect day in these Mazdas. Everything was so perfect in fact that I decided to take a photo of the CX-5 in front of said pseudo-Mormon place of worship. Right up until the point the predominantly white and black SUV blended into its equally white and black religious backdrop. And it suddenly dawned on me that the Mazda cross-over was equipped with a bespoke Mormon Church Cloaking Device. Or MCCD as Mazda’s boffins referred to it. As it happened I got back home in time for the final of the Great British Bake Off and everyone lived happily ever after. Amen to that. 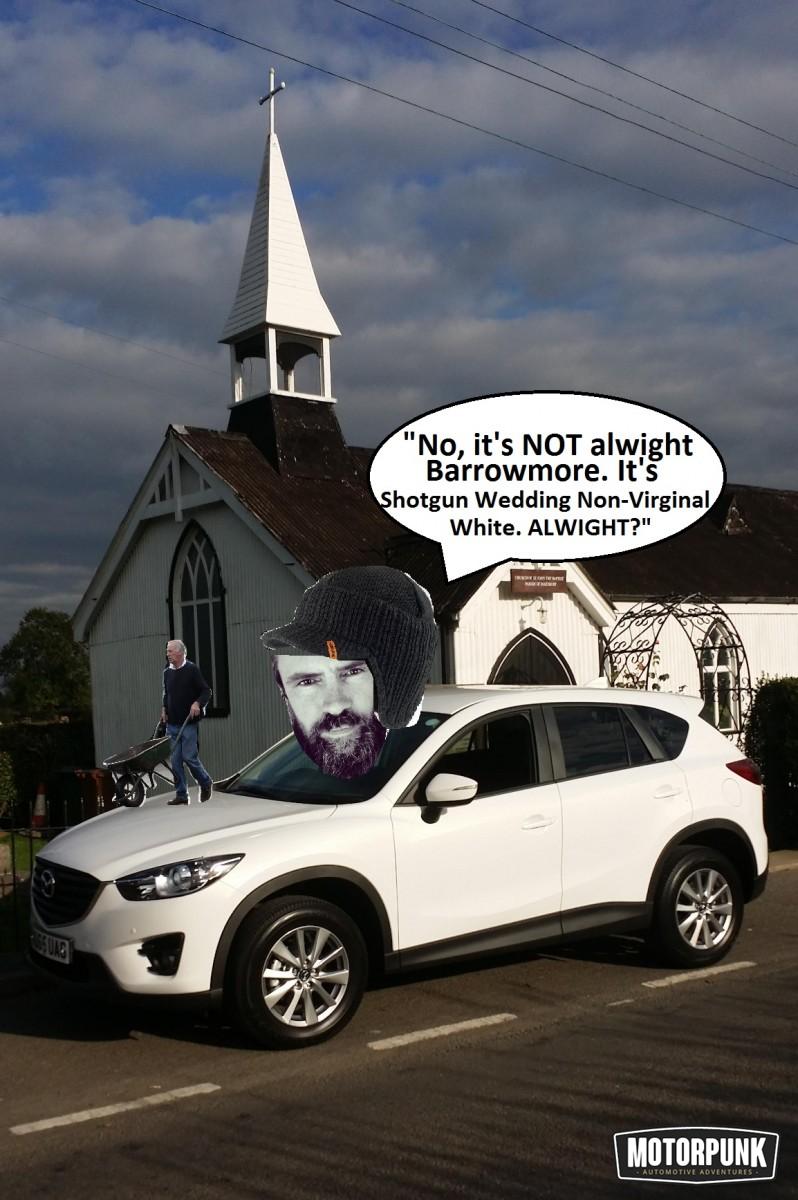