What would Fangio make of it? Even his statue, situated roughly near the back of the start line of the current Grand Prix circuit, seems to wear a slightly incredulous expression. The route may not have changed much but Monaco has boomed since racing started here nearly a century ago. I took a lap with a camera to see how the circuit has developed over the decades.

See above. The ‘before’ pic on the left shows the start of the 1957 Grand Prix (which Fangio won). Grand Prix races were originally started further around the track than today, even mucking about with lenses I couldn’t quite place the old start line precisely, the harbour wall was closer to the road back then. Today, right, there’s a carpark which often has a funfair on it, built on land reclaimed from the sea. Monaco has not only grown skywards, but seawards too. 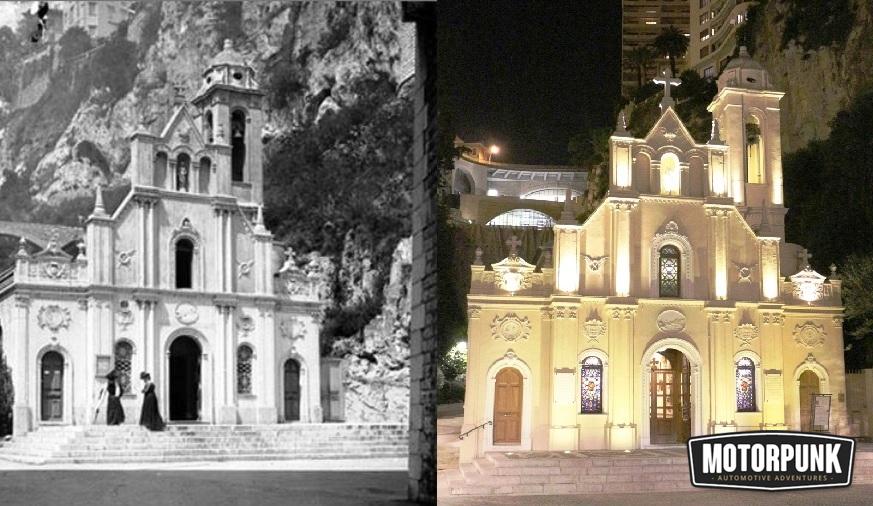 Past La Rascasse and the current start line there is the Santé Devote corner. Not many will know that, tucked away in a crevice in the cliffs on the left, sits a chapel from which the corner takes it’s name. On the right hand edge of the ‘before’ pic above you’ll see a wall, this is an arch supporting a railway line above it, moved in 1964 when the railway was tunnelled through the mountain behind. Sorry, religion and public transport – let’s get back to racing. 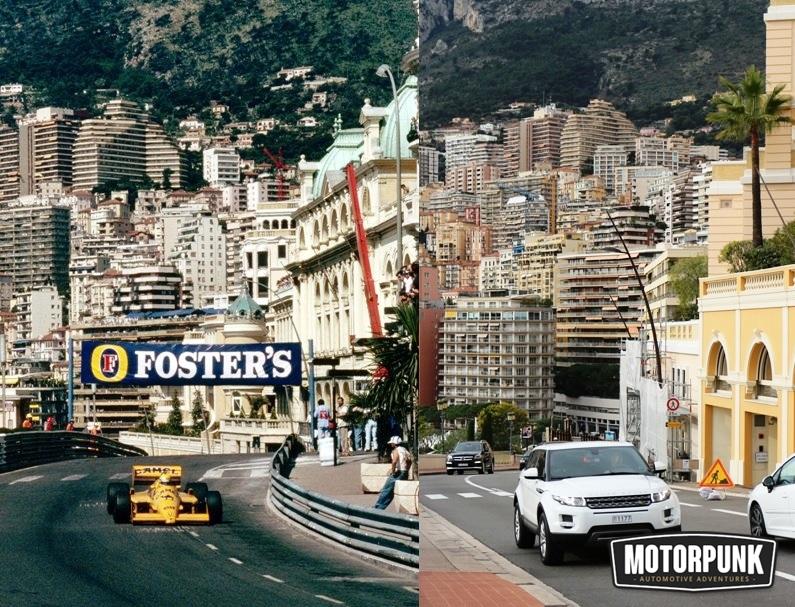 At Beau Rivage here is Senna in 1987, on his way to the first of his five wins at Monaco, this time in a Lotus 99T. The skyline behind continues to grow even today, albeit the Monaco side of the border, that scrubby hillside in the background is France. Monaco is tiny, the second smallest country in the world. Senna’s flat was up the hill to the right. Nico Rosberg lives here today, I once saw him with the kind of small crapping dog that seems compulsory for residents.

The next corner is Massenet, the over-exposed picture above shows Denny Hulme in a McLaren M14 in 1970 on his way to 4th. This was McLaren founder Bruce’s last race, he died soon afterwards at Gooodwood. This was perhaps racing’s most dangerous era, look at the lack of barriers, for example. What strikes me here is the row of shops on the right. Then, in 1970, it was just a hairdresser. Now it is a Gucci shop. Some practical advice to anyone visiting this spot – Gendarmes don’t like Brits seemingly squatting in the road trying to take a photo of a parked Citroen.

That is a BRM running down to Mirabeau, on it’s way to the manufacturer’s final victory, in 1972, with Jean-Pierre Beltoise at the wheel in the rain. Where are the giant killers in F1 today? It’s hard to love modern racing. Sorry for the Renault Clio in shot, I think the driver thought she was being papped and went round the block twice to be sure. 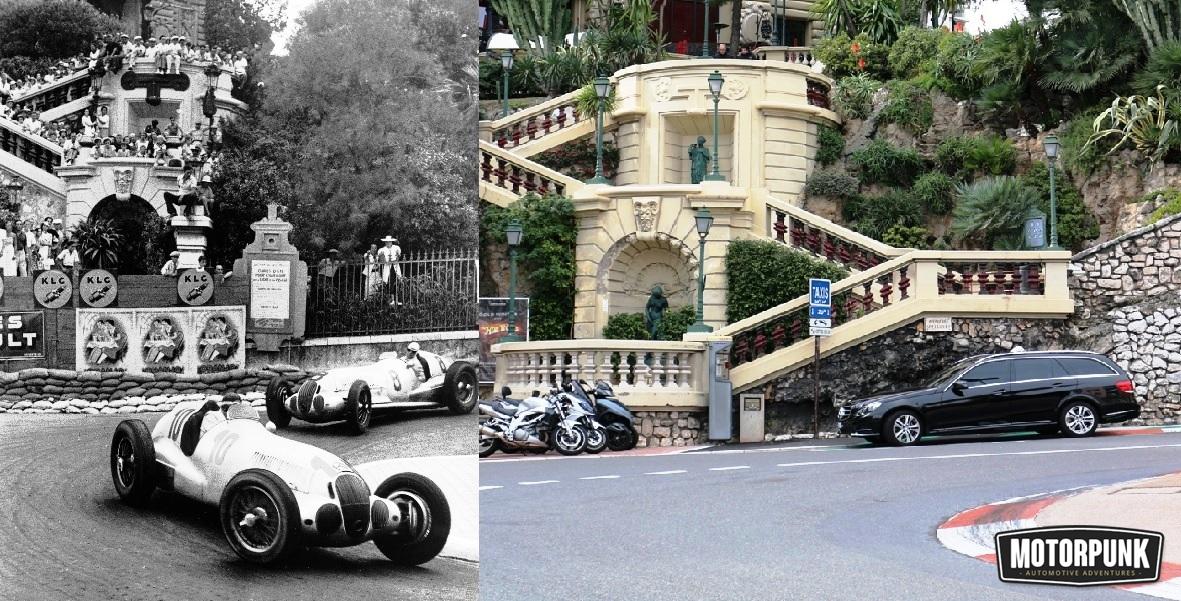 Yesterday’s black and white picture shows a beautifully turned out crowd watching the mighty Mercedes of the ‘30s. No Red Bull baseball caps here. So many GP constructors of that era are long gone but Mercedes are as dominant now as they were back then. Today’s picture shows a less exotic Mercedes, an E class taxi, waiting for a fare outside the hotel that lends it’s name to the tightest corner in F1, the Grand Hotel.

From there, through the tunnel, and down to Tabac where we see a Ford Falcon heaving round the end of the quayside. The trees have grown a bit but the restaurants above still offer the best view of the harbour and boats below, flagged in tax avoiding outposts of the British Empire. Monaco has more than F1 to offer, there’s a long history of rallying here too in the mountains above. Note the Range Rover impatiently waiting for the MotorPunk logo to cross the road.

Here’s Paddy Hopkirk accepting the trophy for winning the 1964 Monte Carlo rally, outside the Palace, little security apart from some ornate cannon. No all-British team has won the rally since. The building is unchanged today, but the pomp falls short, note the dopey guard nodding off. Back then it was Prince Rainier III and Grace Kelly, today we have Albert and an unhappy colonial swimmer. The cannonballs are welded together in a pile.

And some bonus pics below; See the blue Nissan 300ZX? From the palace, top left of the shot, on far side of Fontvielle harbour, it looks rather like an Alpine GTA, a rare car well worth traipsing across town to photograph. Unlike a Nissan 300ZX. The Mini cabrio, with bullbars, looks faintly ridiculous anywhere in the world – apart from here. The grey E type personifies style over fashion, driver smiling. I rather liked the red Fiat at the Casino too. Staggering home from a gin palace later I spot an Aston Martin Rapide, parked not far from where Ascari put his Lancia in the drink in ’55. 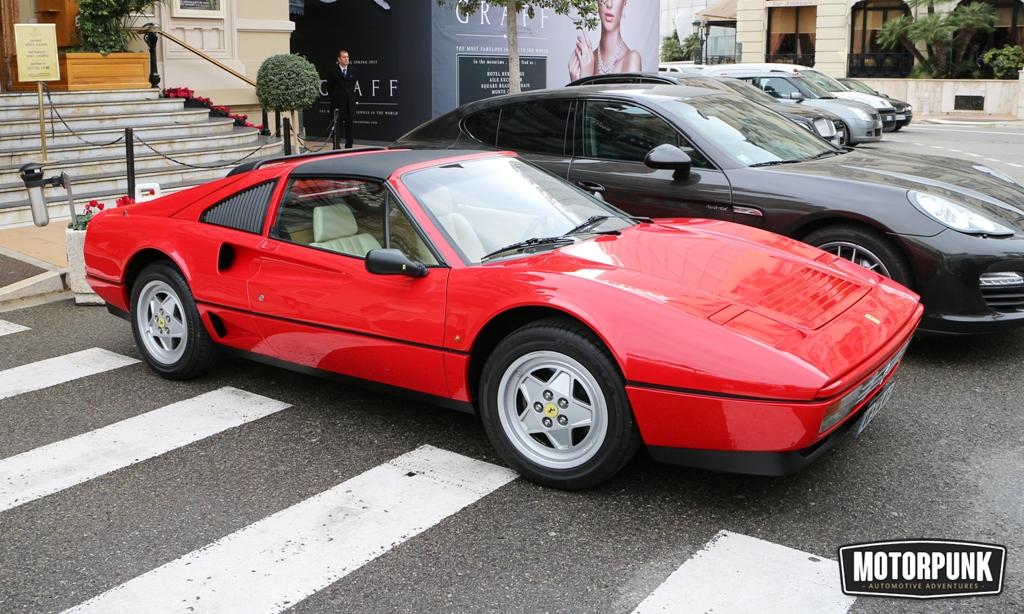 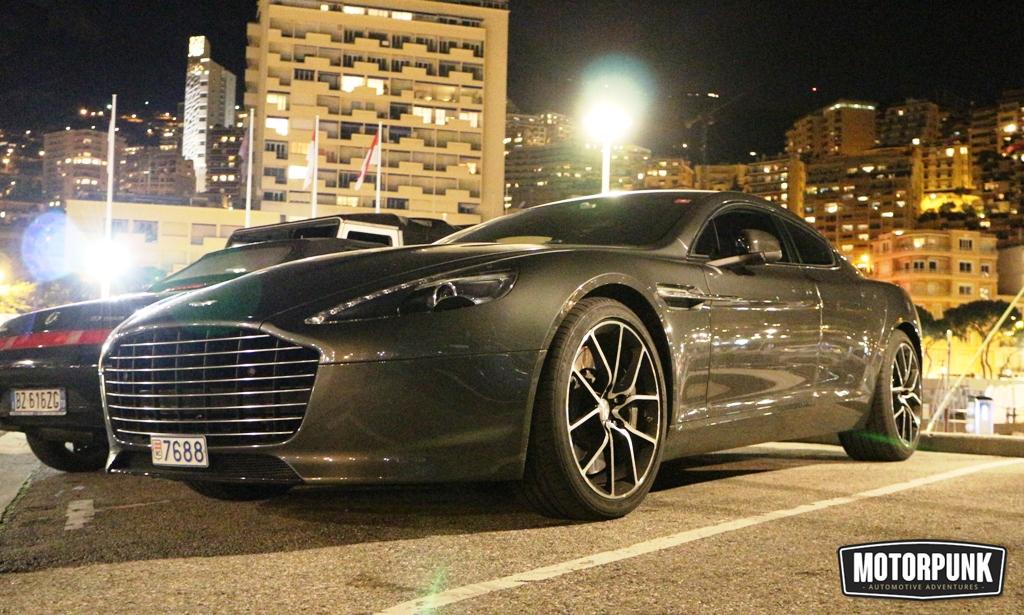 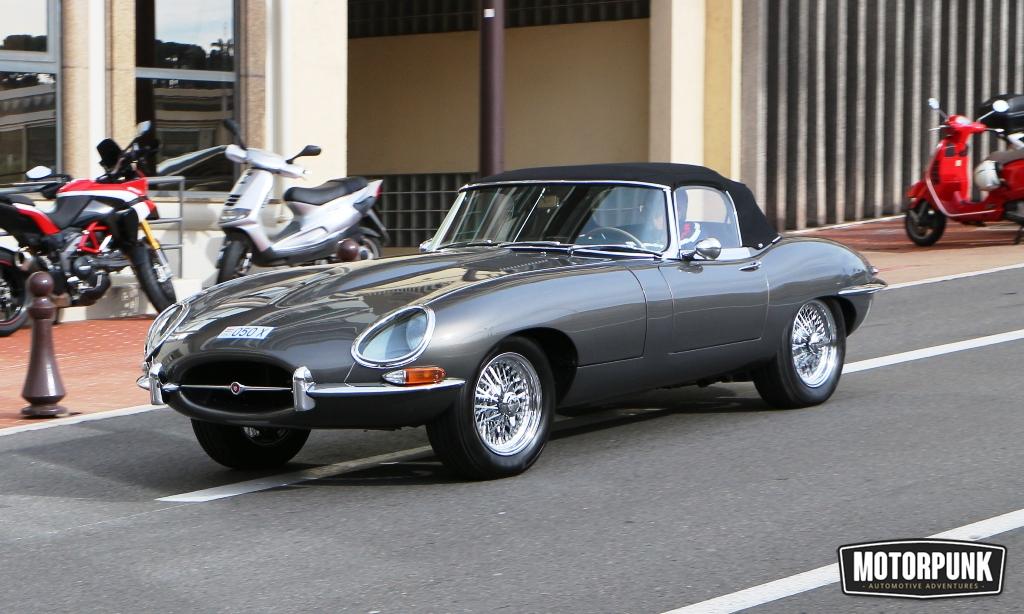 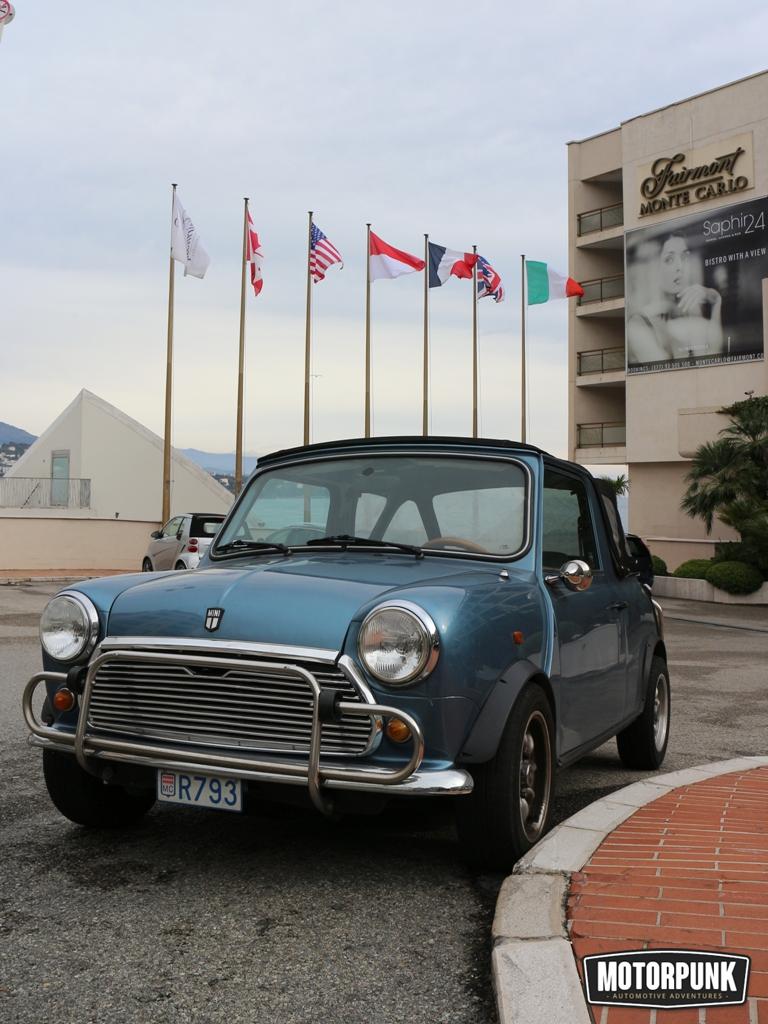 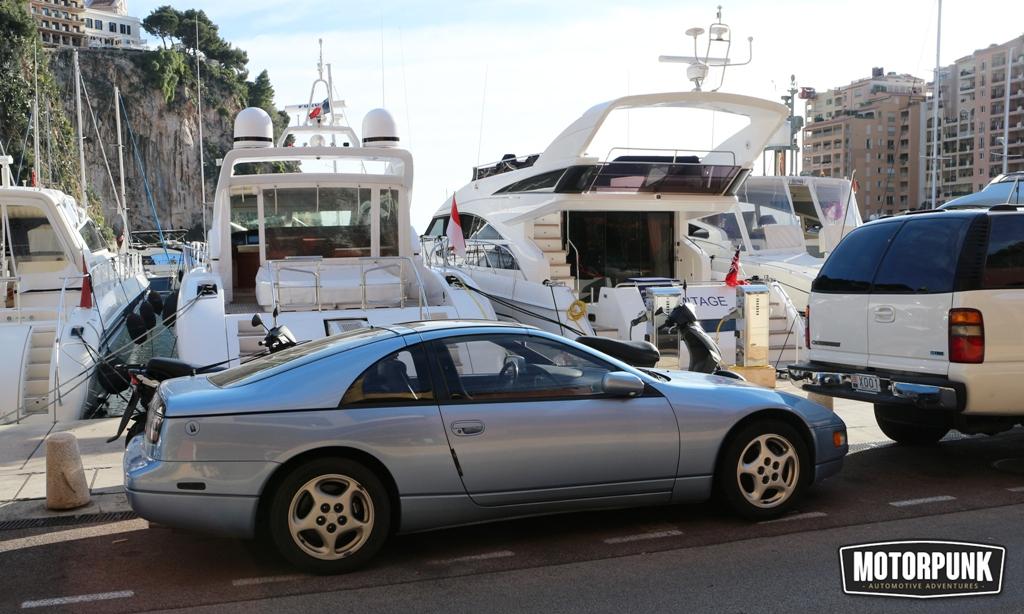 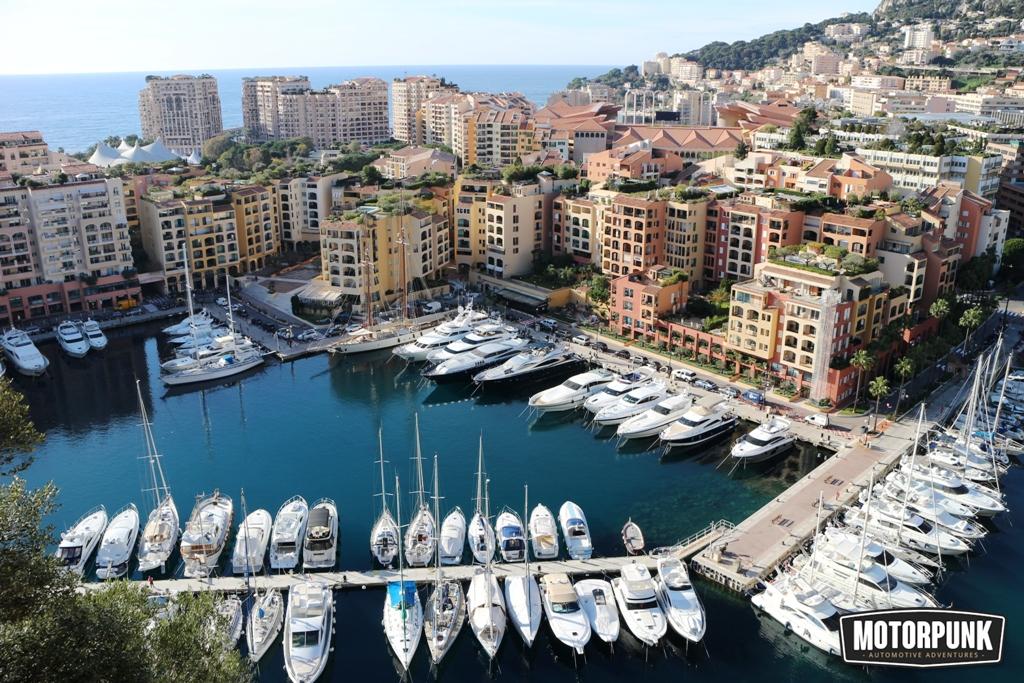 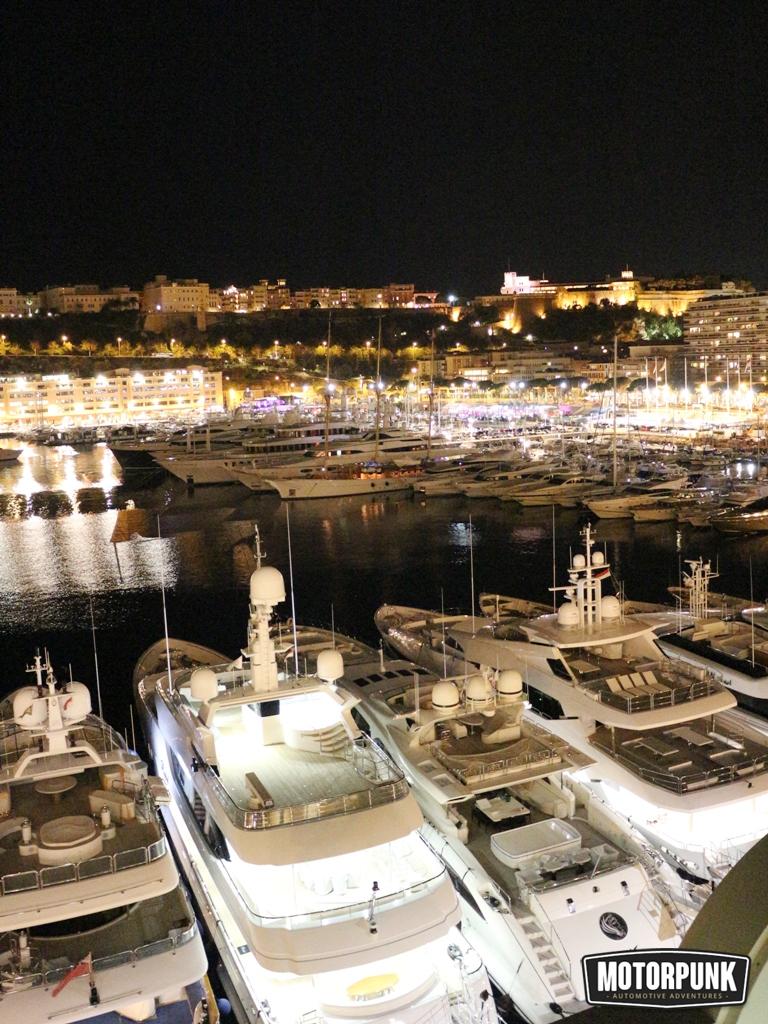 Monaco might be booming today but yesterday’s racing was considerably more exciting, I’m sure Fangio would agree.

Many thanks to Fat Bald Bloke for the McLaren info, Mercedes-Benz, HeavenIsInMunich, Hemmings, SennaFiles and AutoSport for the pictures. Other pictures by the Author. This feature may not be copied or reproduced without our prior agreement or we’ll send Fat Bald Bloke round.