This was, enthusiasts say, the last proper Citroen. The last model designed and made before the company was absorbed into Peugeot and had all it’s wonderful creative craziness beaten out of it. Citroen made 12 million CXs, but when was the last time you saw one? The HowManyLeft website reckons there’s under a hundred left on UK roads. Ironically, the complex and unique components in the CX were not the bits that failed. The parts bin components surrendered first, and then rust took hold. Much rust. But we love these things. CX is a French abbreviation for drag co-efficient, the sleek design looks particularly good on the Safari (estate) models. The brilliant hydro pneumatic suspension was supplied to Rolls Royce for use on the Silver Shadow and copied by Mercedes Benz. The dashboard had no stalks, all main controls were button operated and could be reached from the driver’s fingertips without letting go of the steering wheel. The indicators were not self-cancelling, the designer believing that the driver should choose when to cancel them himself. Series 1 models had a rotating drum speedo, series 2 models had a stereo mounted sideways between the front seats, and it was all quite mad. Even the TV commercial was crackers. And then we found one, a cheap one, in the classifieds on car and classic… 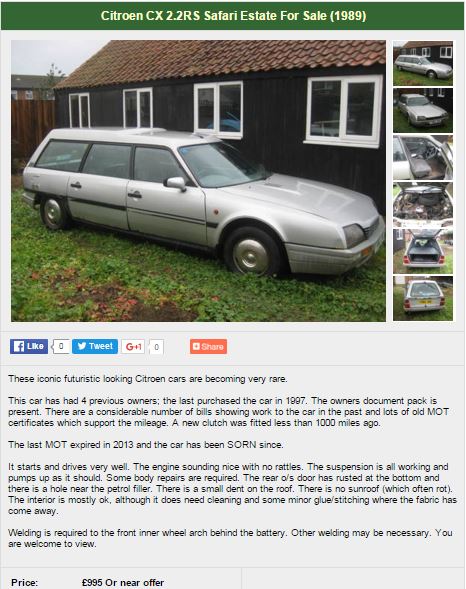 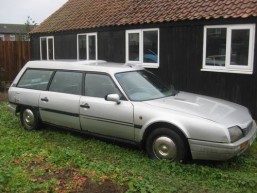 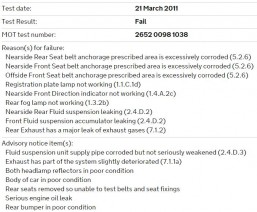 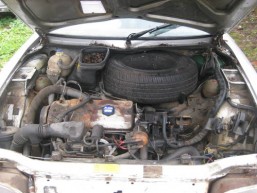 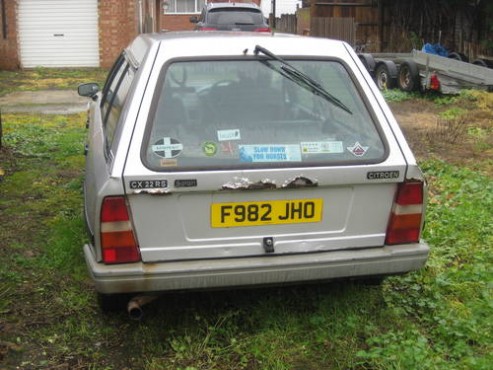 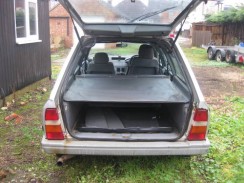 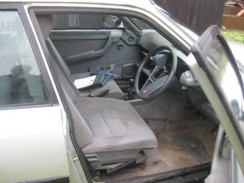 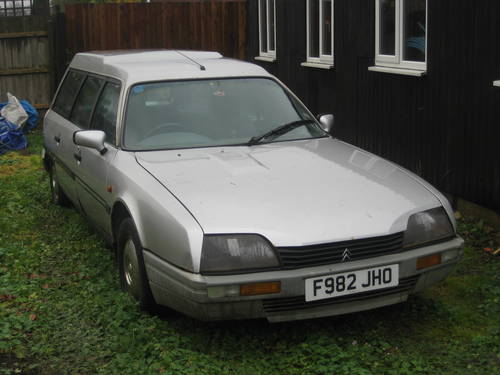 In a field, in Lincolnshire, a place eternally damp, sits this late model CX Safari. Turn a blind eye to the frilly door bottoms and focus on the stickers on the boot. This car has been to Cornwall and back, so it must be reliable. The driver slows down for horses, so the owner must be courteous, and the help for heros sticker tells us they are a good egg, too. Nice people usually = nice cars. There’s some trim missing, we’ll put that down to wear and tear. Everything under the bonnet is either rusted or filthy, so it’s original and standard, and perhaps there’s only one shot of the interior because the seller didn’t want the valeter in shot when taking these pictures. The 2.2 inline 4 is fed by a single carb and is a simple old thing, designed by a chap called Jean-Jaques who made F1 engines, dontchya know? The seller mentions “a considerable number of bills” and sticking the reg into the MOT History website shows a long record of quite spectacular MOT fails, mainly for rust, before it was parked up nearly three years ago. But we love it, all the same.

Buy it, get welding, bring it back to life before it gets turned into baked bean cans and we wonder whatever happened to the last of the proper Citroens. Tempted? Advert here.