The Flying B Lifestyle Periodical. I have no idea if there is a magazine dedicated to Crewe’s big machines but, if there is, I imagine it has such a title. There would be thick, expensive pages showing shiny behemoths and (like all other one-marque mags) page after predictable page of fawning praise. After adverts for yachts and for those wooden garages that cost more than my house, there’s probably a buyer’s guide – insisting on originality. There’s little original on Paul’s Turbo R and so am I glad to see it here on the modest pages of MotorPunk instead. This is our kind of track car. 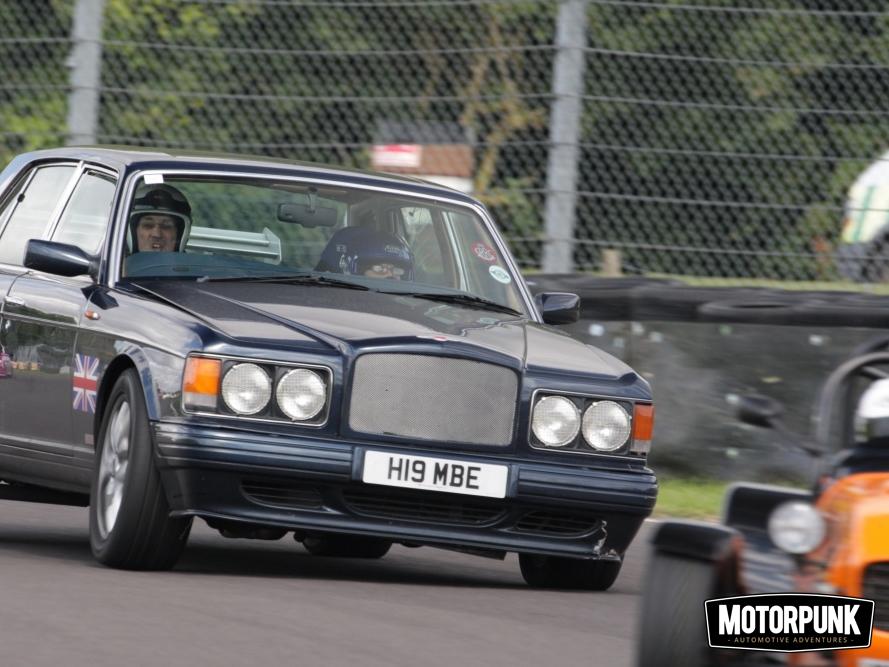 It’s important to point out that, before we delve into the insanity of this project, that Paul has created this for fun. If you wanted to build a track car then having something the size and weight of a bungalow isn’t a logical starting point. As one metric for his madness, consider a weight of 700Kg. That’s the total weight of many dedicated track cars. That’s also the weight that Paul is aiming to shed from his. But there’s more required than just lopping off lumps of oak from this 2390Kg car to make it fit for purpose. The engineering challenge of finding parts that make a Bentley go, stop and handle better is quite considerable, too. These cars weren’t designed to be raced. There are very few off the shelf parts available for that. Before we look at what the car has lost and gained, we ought to consider the ugly subject of money. And some ugly issues. 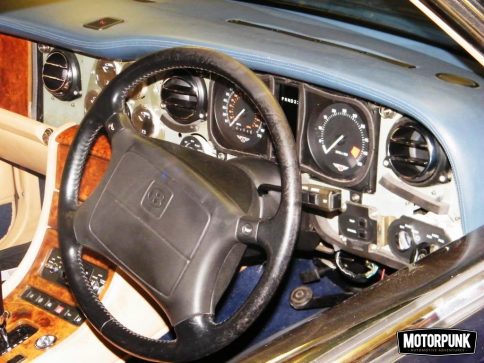 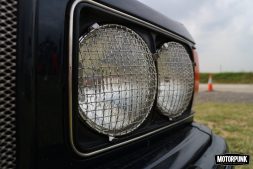 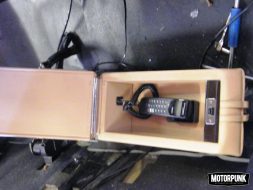 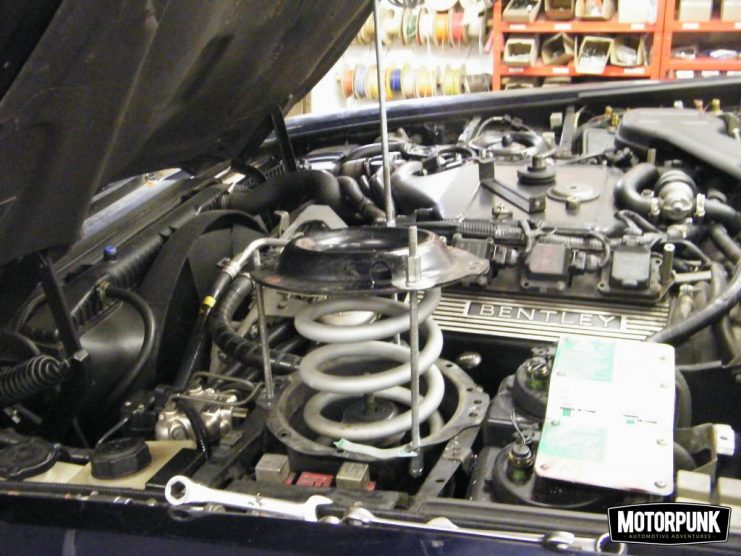 Paul paid £8000 for this 1996 built car. The central locking and alarm were defunct. The HVAC control had a fault. The engine management light was on. The hydraulics needed servicing and there were a few bits of rust and rough paint. A new ECU would fix the locking and alarm; £800 or £200 for an exchange. HVAC costs as much time as you want to spend up to your elbows in wiring, fault finding. The engine management light was due to a faulty speedo cluster; £200 for an exchange or £1000 for a new one. A specialist quoted about £3000 to sort the hydraulics and a general service at an Indy might be £1500. And how much is a good, glass out respray? In total the car needed at least £10k spending on it, and might be worth £15k when complete. Is this car so rare that it should be restored to factory specification and saved, with pictures submitted to reader’s rides in our fictitious Bentley publication for others to inevitably sniff at the choice of tyre? As Paul himself says; “bollocks to that”. 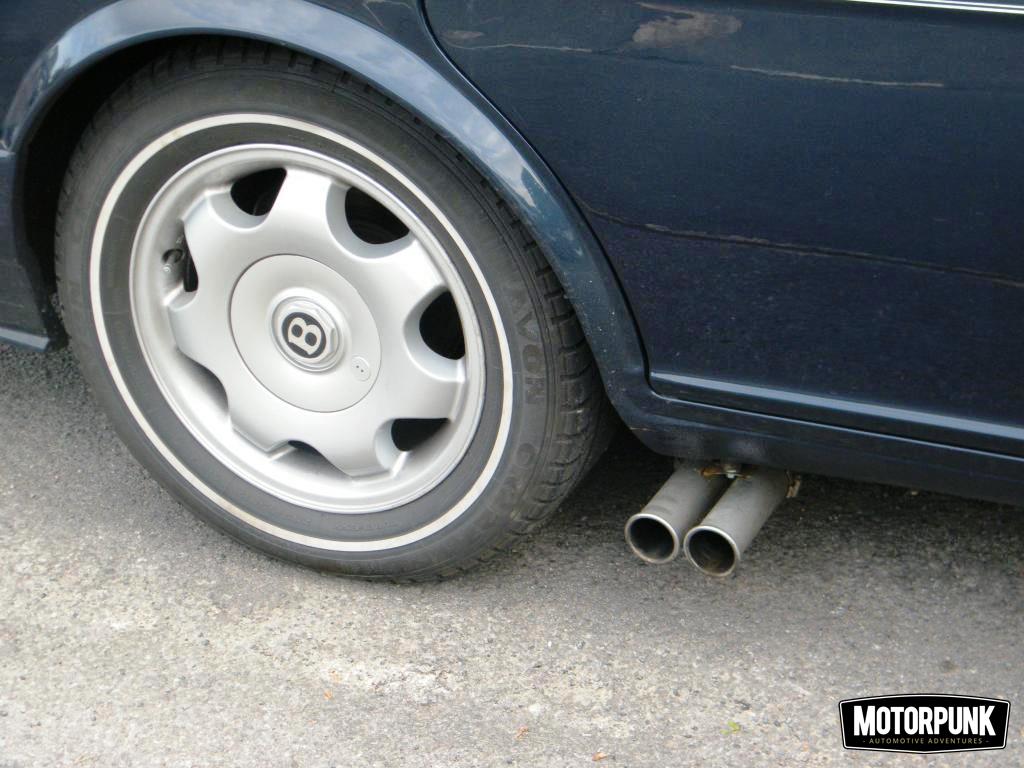 The one thing that everyone comments on is the side-exit pipes. They’re not as noisy as you may think, measured at 97db at 3500 rpm by a Marshall who checked his own kit three times not believing the result. The real benefit is the loss of many Kilos of the original exhaust system. Paul admits the spoiler is silly, but it’s not silly enough – a bigger one is on order. It’s quite common for well-meaning passers-by to point out what looks like a water leak. These cars have a 10 litre tank in the front wing, dispensing water to cool the brakes when they’ve been overworked. Pauls get overworked quite a bit so a 30 litre tank has gone in, and to try to keep to the weight-loss targets it now feeds the washers too with the washer bottle removed. 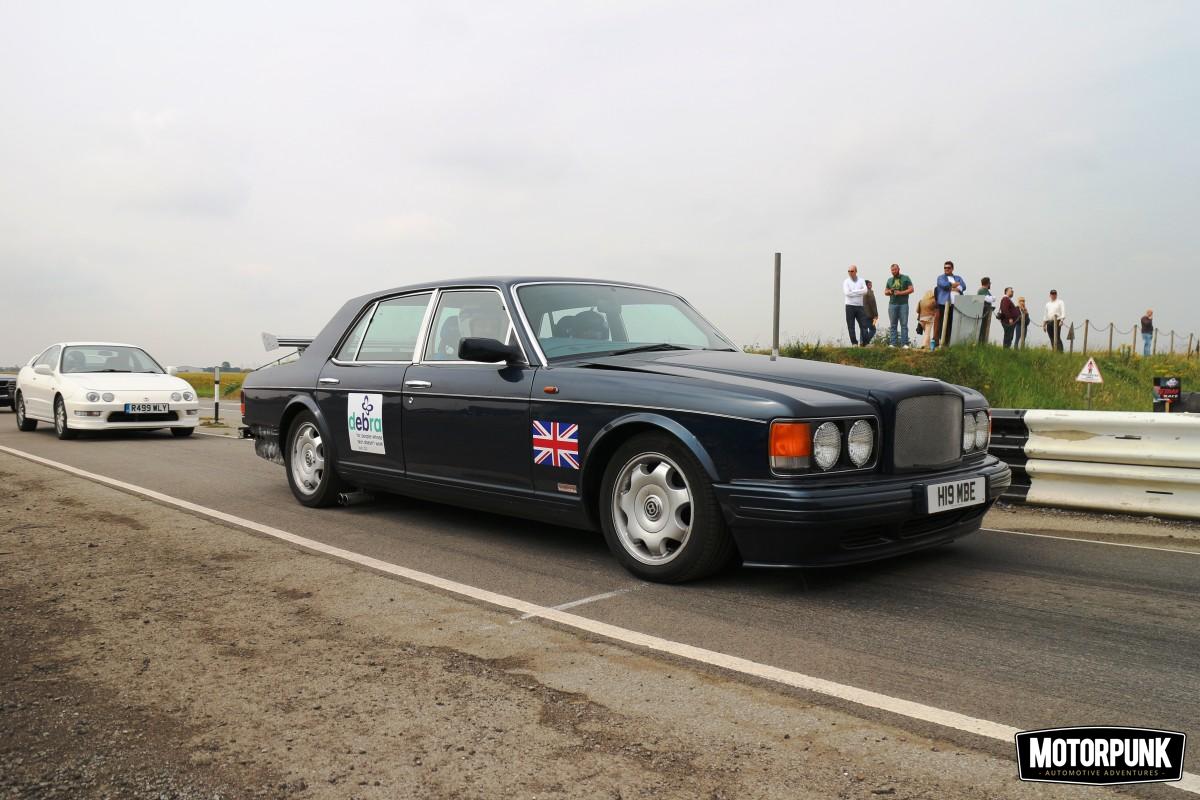 The original brakes lasted less than an hour at Castle Combe and have been replaced with Hispec 380mm discs and twin 4 pot callipers grabbed by Mintex 1155 pads. The car needed a better ride and rubber, so there’s now 305/30/19 to replace the original 275/45/19. Bentley geeks will be disgusted by the fact that, since these pics were taken, a set of Porsche Cayenne wheels were fitted to allow a better choice of tyre. The arches needed cutting and rolling a smidgen but R888s adorn each corner now. The whole thing sits on slightly lowered springs and the subframe mounts were all replaced with Nylotron items. Quaiffe wanted £3500 for an ATB diff, so that remains on the ‘to do’ list for now. The ARBs are a chunky 1 1/4” This car is lower and stiffer than ever before. Now, it handles. 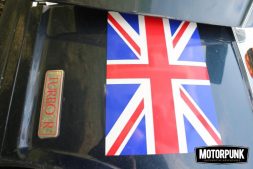 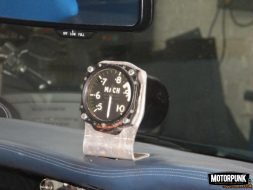 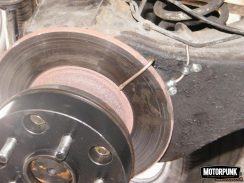 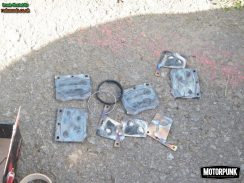 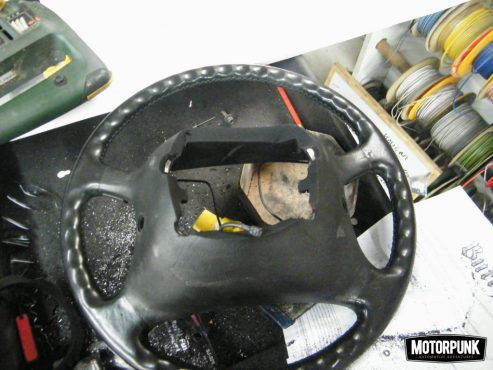 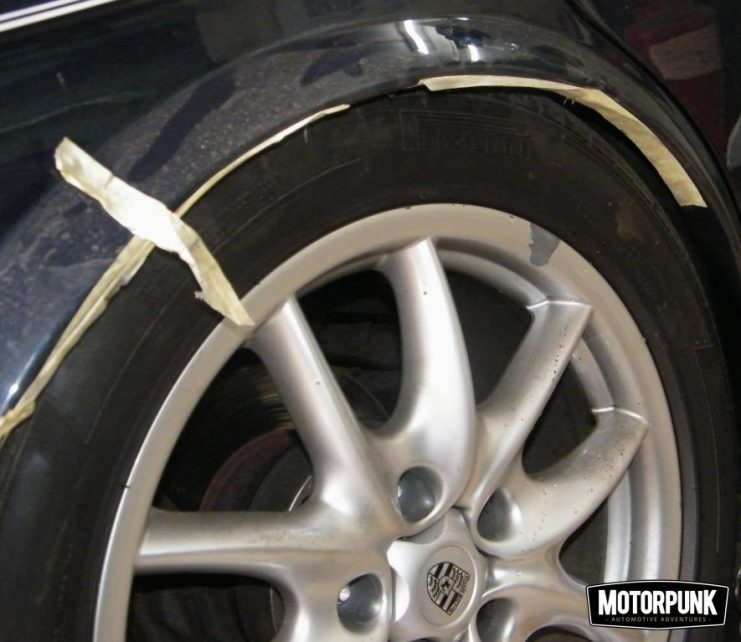 Inside, the work continues; gone is the electric steering column adjustment, window adjustment mechanisms and much of the seating. Bespoke, lightweight door cards have been added and seats removed. Elise seats are planned. The gear change mechanism is particularly pleasing. Out is the old controller, in is a bespoke ECU with button controls on a Sparco steering wheel ordered in from Estonia. The hubs didn’t quite align, so the original steering wheel was hacked apart and the original brackets scavenged from it. The active ride electronics were one of the first things to go; complex, heavy and unnecessary. Windows are mostly Perspex, and the heavy leather headlining has been removed. Fibreglass bumpers are on order and there’s a bespoke carbon fibre roof sat in the workshop… I so want to be there when he chops the old one off. Lots has come out. The loom for the stereo alone weighed 5Kg! He’s not down to 1800Kg yet, but well on his way. The grille and headlamps help retain the ‘oh do move out of the way, dear boy’ road presence – invaluable on a busy track. As a pièce de résistance (and a reminder that this has been built for fun) Paul has fitted a starter button and Mach meter from a vintage RAF fighter. 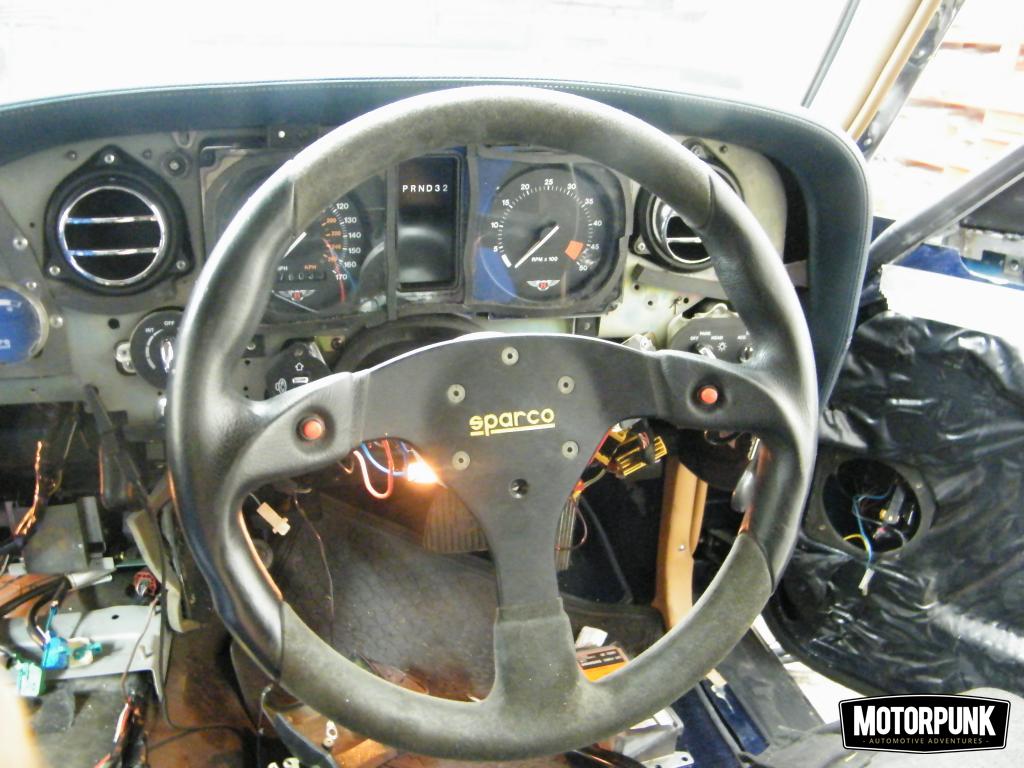 With all the effort made to make it handle and stop better than Crewe ever did, attention went to the engine. The original 6.75 litre engine in this car had, supposedly, 385BHP. Still in production (in the Musanne) it was first used back in 1959 and takes nearly 30 hours to build. Paul’s 1996 example has Zytec fuel injection and a single Garrett T04 turbo. The GM 4L80-E transmission is pretty tough, it is also found in the original military Hummer, but the gearbox controller has been reprogrammed to make it a bit less ponderous. Paul is aiming for 600BHP. This, he freely admits, is rather ambitious. Turning up the boost simply turns up the heat. The valves cook pretty quickly in such conditions and even the Sultan of Brunei’s own cars, tuned for a supposed 650BHP, actually did about a hundred less on funny fuel and even then only for a few seconds before things went into meltdown. To help with the heat the exhaust manifolds, turbo, and downpipes are Zircotec coated and there is water injection, too, 30 degrees lower than ambient is possible here. Paul has added bonnet vents too, but overall it’s a complex job. A replacement engine is prohibitively expensive so there is no room for trial and error with tuning. Paul is off to see Dave Walker at Emerald to replace the Magnetti Marelli unit and extract the best from the Bentley. 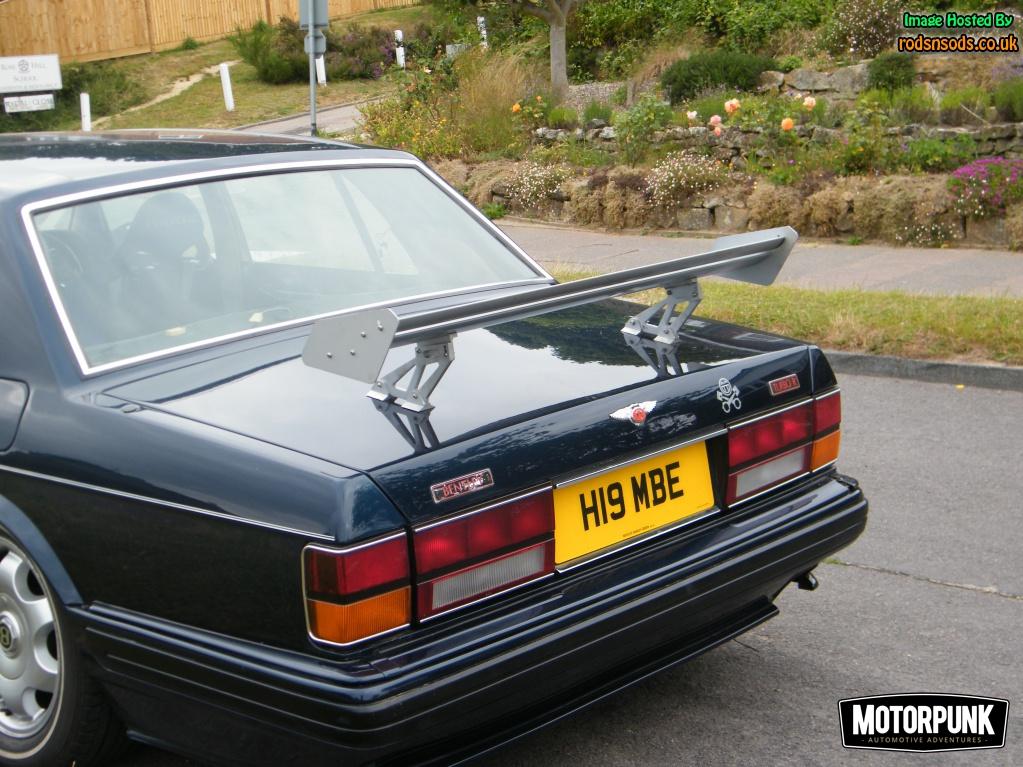 Look beyond the wing and stickers you’ll find that Paul has gone about his work in a very logical and intelligent manner. The result is magnificent. I’ve had it sat a few inches off my bumper for a few laps at Blyton and it’s almost impossible to shake off. The owner of Blyton called it “the best thing we’ve ever seen on track here”. Paul will be happy with that. Modern Bentley drivers might be considered by some to be more berk than Birkin, but this car proves that these cars can be fettled for performance on a budget. And if the sight of Paul thundering about on track isn’t funny enough, sight of him towing a caravan with his Turbo R is sure to have the purists reaching for their Blancpain pen, and sending a furious letter to The Monthly Illustrated Bentley Fister. 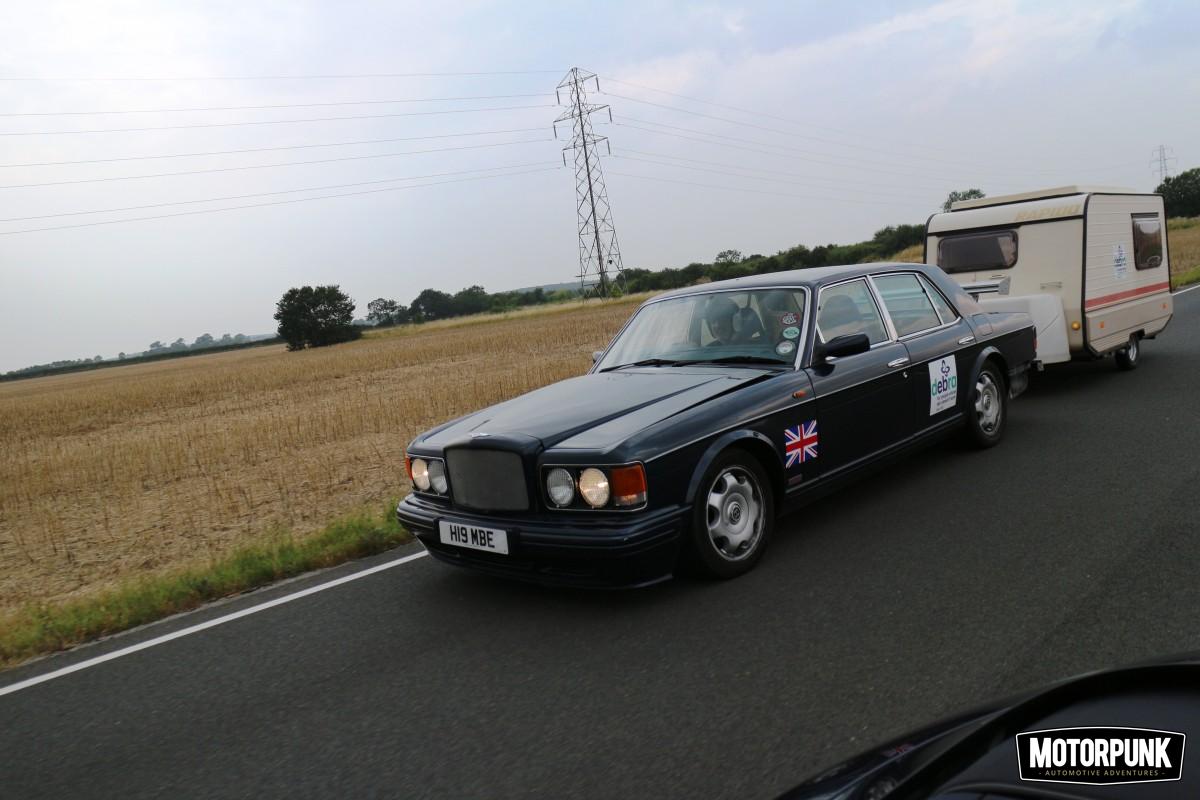 Pics (some) and words (all); Rich Duisberg.

PS – Paul asks for you to have a quick look at a charity he is involved with, please have a look online at www.debra.org.uk